Metal is generally pretty forgiving, and there is a lot of shape that you can give using hammers and other such tools. Unfortunately you can push it too far, as I periodically discover. Here is an example of an ulnar bump on a gauntlet. This is a pivot plate that fits on the wrist – the pyramid covers the “bump” on your wrist so that it isn’t in contact if the gauntlet is hit. 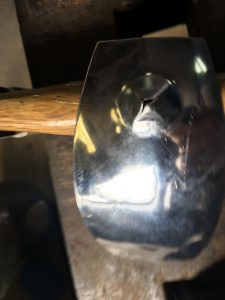 This is what happens when you exceed the ability of the metal to conform – these photos show a fracture (some would call this a tear) and this is what happens when your material work hardens and then you put a lot of force on it. In this case, hammering a pyramidal stake into a lead block with an 8 lb (4kg) sledge hammer. This is simple enough to avoid by annealing – but a full anneal would require a lot of time in a forge or kiln. An easier alternative is to stress relieve the material, heating it to a bright orange and then letting it air cool. This can be done with a propane torch and will work for most materials, but carbon steels can be a bit finicky so for carbon steels I tend to actually anneal them. For mild and stainless steel, heating to orange works fine, and lets you get on with your forming. In this case, I simply heated the intermediate stage, where I formed the “bump” with 3 progressively smaller dapping punches, one on top of the other and then heated this to orange. 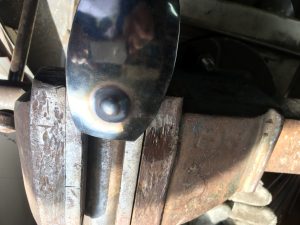 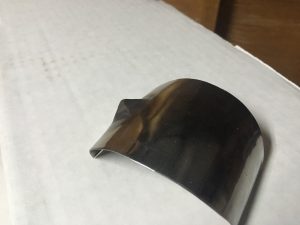 As you can see, forming the pyramid after stress relieving worked perfectly well. So why wouldn’t you stress relieve as a matter of course? This takes time, and a fair amount of the time I can actually get away without needing to do any stress relief of pieces. When you stress relieve, you are eliminating any work hardening of the piece, and in the case of some pieces (such as knuckle gadlings) you actually want these as hard as possible since in any condition where they can fail (such as being struck when braced against something) you would generally prefer them to have as much strength before failing than having them yield (deform).

Stress relieving also takes time, and while it isn’t a lot of time, when making a lot of pieces (like the aforementioned gadlings) an extra few minutes per piece adds up: I need 16 finger gadlings for a pair of gauntlets which I generally don’t stress relieve. I also need 2 thumb gadlings, which I always stress relieve because these have a lot of depth to them.

I took 5 minutes to tidy up a couple of my hammers today. For those who know me, I’m pretty much the antithesis of a neat freak in the shop, but I periodically put a mirror finish on my hammers.

Why would I bother?

Well, here is a picture of a couple of my more used hammers, one repolished and the other before polishing: