This was actually a project that I started (and finished) today after trying to figure out a good “practice” exercise for gothic gauntlets, since the metacarpal plate shaping is “tricky”. Then it occurred to me that Besagews have the same “ridge and scallop” shaping, and should be something that I could teach an intermediate armourer in an afternoon. Instead of going into the historic background of these, I thought that I’d just put up the build. Even doing this as a quick post, the preparation of the post probably took more time than the Besagew, which I timed at 40 minutes (including the pattern)

I’m going to cheat and just include the gallery of photos at the bottom instead of embedding them inline, but they follow the order that I am outlining here. here are pics of the (rough finished) besagew, as well as the edge view showing the “scallop”. The center hole will be used to mount the attachment (probably a leather loop)

[Edit] – added a pair of videos at the end, one of shaping the besagews once the flute lines are roughed in, and a second showing the sanding (at 240 grit). I have also added some “fancier” Besagews, which are the second set of photos below 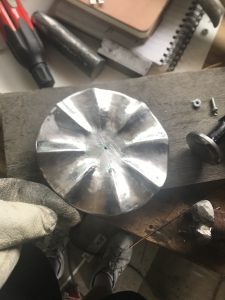 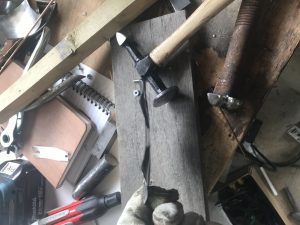 Here are a couple of alternate versions, which were made by spending a bit more time cleaning them up, and different grinding for the edges. This gives a more “floral” version and a “needs more umlauts!!” gothic version. For comparison, the floral version was made by Dean, who has been making armour very part time for about a year, and this was completed in about 2 hours in an afternoon with almost no input from me other than a demonstration of the technique 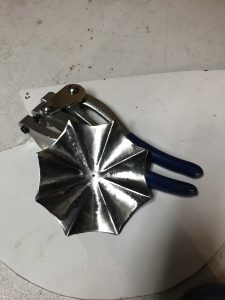 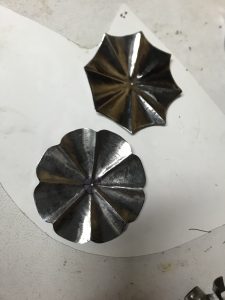