Working through the “finishing” stages of my current gauntlets, I though that it would be worth demonstrating how easy it is to do some of the “fiddly bits” that differentiate “nice” reproduction gauntlets from “ho-hum” gauntlets. Almost all gothic armour has in incredible amount of decorative details, much done with punching or filing. Since I have little interest in becoming a master in the use of tiny chisels, I tend to cheat excessively, and the “heart” motifs that are scattered on the edges of many gauntlets plates are very easy to do with a metal punch (or drill) and a jewelers saw or coping saw. 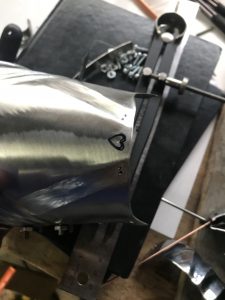 The first step is to figure out where the decoration should be, and what the orientation should be. If you are reproducing an existing piece (in my case, the A254 in the Wallace collection) this is easier since you just copy what they did. Hearts are a very common edge motif, and in general the “points” of the hearts face outward from the pivot plate on the wrist. Note that the middle plate of the three plates that cover the back of the hand has 3 circular holes rather than hearts so once these holes were punched I was done with these pieces.

As I noted, I cheat horribly – once the parallel (and overlapping) holes are punched, all I need to do is cut straight lines that intercept “above” the parallel holes. When these meet, the extra piece drops out, and I have some nice hearts.

In retrospect I probably should have made smaller hearts – these use 9/32″ diameter holes (because that was what I had in my punch at the time) while 3/32″ holes are probably more appropriate, for smaller hearts. the central hearts on the cuff and first hand plate are roughly 50% larger than the other ones, so this would have been a good place for the larger punch size. If you look at the punched holes you will note that I just punched a single hole for these large piercings, and used my saw more or less freehand to make the larger piercings. I’ll probably have some exposed “gaps” since my current pattern has very minimal underlaps, but part of the reason for doing this gauntlet is to refine the pattern for the carbon steel versions that I am currently prototyping.

It’s probably worth noting that the total time to do all of this “decoration” is under an hour per gauntlet, less than the time I expect to spend filing and doing the (minimal) roping on the cuffs, and significantly less time than it took to attach the “wrapper” plate (helping to explain why these aren’t seen until the 16th-17th century)