I’ve been too busy building things to be doing regular updates, but it’s worth mentioning that I just heat treated a pair of early 15th century articulating knees (Poleyns). The basic treatment is simple enough – heat to between 1500 and 1600 degrees F and quench (I used an oil quench) followed by annealing at 400 degrees for 40 minutes (this was empirically tested). Note that I had a couple of lames (the pieces that articulate) that I had screwed up earlier and / or used to practice technique to test so that I could mess up and / or destroy representative pieces without destroying things I actually cared about! 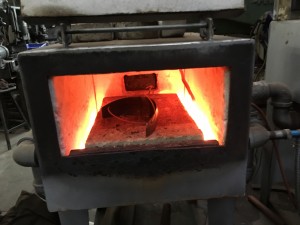 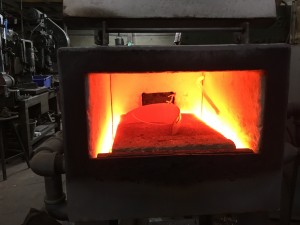 Part of the concern of heat treating is how much distortion you will get, particularly with hand formed pieces which will have a lot of uneven stresses. To alleviate this we initially heated below the critical range (to around 1200 degrees – still a cheerful orange) and held here for 15 minutes to stress relieve the metal. This did not have a significant impact on the shape (we traced before and after – again, pics below) and eliminating this step did not result in distortion more than a few millimeters (less than 1/16″) on lames. The Poleyns distorted more than this, since we did not have a sufficiently large furnace to play with and had to juggle the quench. This was offset by having very even heat in the furnaces we did use, and a change in our quench technique on the second poleyn led to a much easier quench with less distortion. 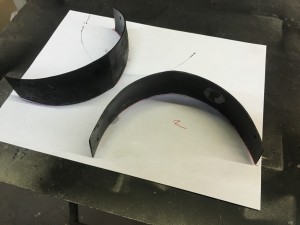 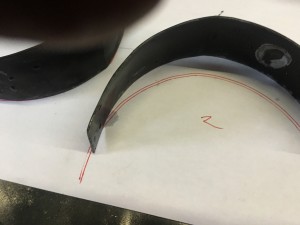 Following the initial quench we wanted to see if this “slack quench” was enough to keep the metal from being too brittle. The answer was “no” (but not a resounding no – most armour isn’t held on an anvil and struck with a sledge hammer). The quench makes the metal (1050 in my case) very hard, and we tested this to failure (like breaking glass – video below).
Knee lame test to failure

Following the failure we then stripped the “test” pieces to reveal bare metal and tempered at 400 degrees until we had a nice blue (which resisted the sledge hammer) and then to a mid-purple – since this armour may be used in combat I would prefer for any failure modes to tend toward deformation rather than shattering. We stopped the test because we were damaging the anvil…
Tempered knee lame destructive test

The poleyn itself was a bit more of a challenge, since it barely fit into the largest furnace we had available, and barely fit into the quench tank. We did brace these with rod between the articualtion holes, as seen below, but couldn’t think of a way to brace the wing and still fit it into the furnace. 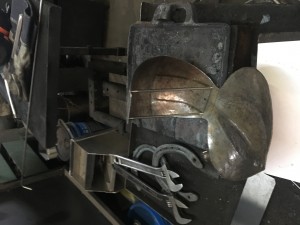 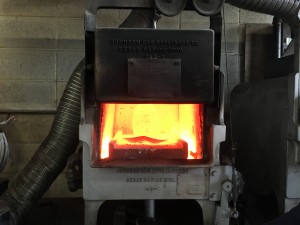 As a result the first time we pulled it out, the “wing” got torqued, so this may need to be repaired, requenched and retempered. Since the object of the exercise was to see if this worked at all (and figure out what issues needed to be dealt with) it’s still a success, and the degree of offset is low enough that if the knee will articulate it will be “good enough”. The second knee we went with a more straightforward quench (one set of tongs instead of two) and it looks like the distortion was minimal – another post to follow as these get cleaned up and articulated!