I’ve been cleaning up my heat treated and tempered knees, and thought that it would be useful to make a few notes to remember if you are doing this (or if I’m doing this after a long hiatus, which has been known to happen)

A bunch of this is obvious in retrospect, but my attempt to planish out some surface irregularities on tempered carbon steel was a hilarious (but not at the time) failure. Since I didn’t know how much “depth” I would be losing to firescale I figured that I should do all of my surface updates AFTER heat treating. Oops. This clean-up has taken a whole lot of time, hopefully the rough (150 grit) pass on the other knee will be considerably faster. 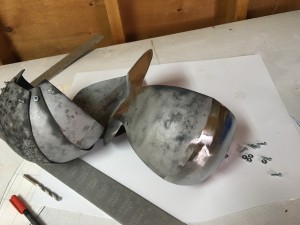 So things to remember
Do all of the rough grinding / clean up of surface irregularities before heat treating because:

More pictures when this gets finished…